These are very common terms in every industry right now, and the surrounding buzz is often confusing for a lot of us. In fact, in many places, you might even hear them being used interchangeably. As a result of this, the difference between artificial intelligence(AI), machine learning(ML), and deep learning(DL) can be very unclear.

Before we begin to understand how different they are, we need to know how and why are they similar. They are deeply interconnected because machine learning is a subfield of artificial intelligence and deep learning is a part of machine learning. They improve each other’s potential mutually. The progress in ML and DL has led to groundbreaking developments in AI. AI, on the other hand, can be applied to machines to predict their behaviour and actions. So ML and DL make AI better, and AI makes them more useful. 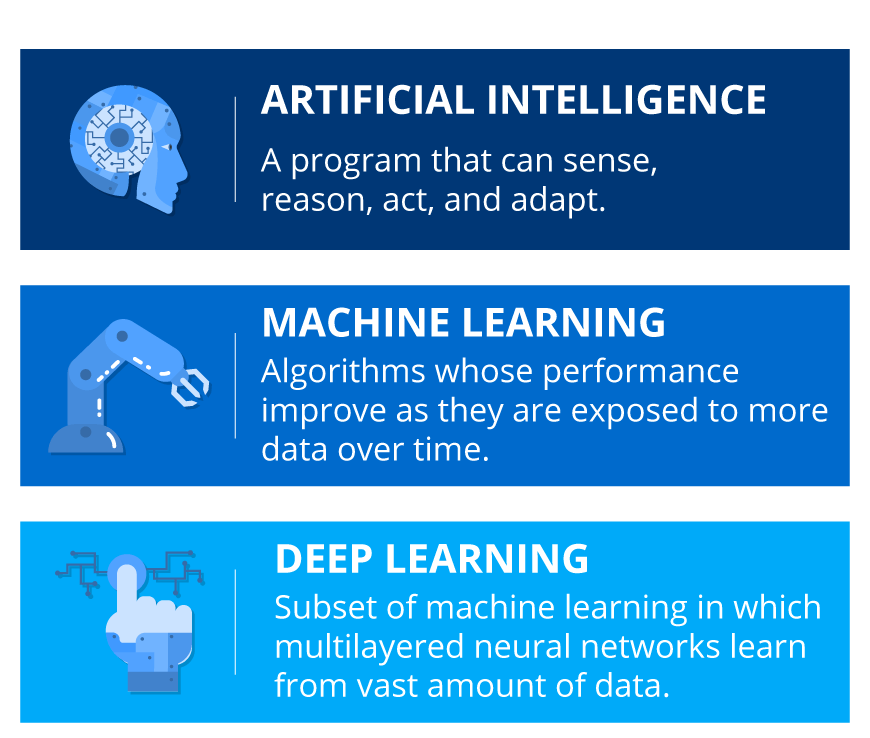 In 1955, John McCarthy, a computer scientist coined the term Artificial Intelligence. Artificial intelligence refers to the intelligence demonstrated by machines, in contrast to the natural intelligence displayed by humans and other animals. So AI makes any machine smarter. It can range from a computer program playing chess to Alexa or Siri which are capable of speech response and interpretation.

AI is of three types.

It’s named as ANI because it performs only one particular function. An example of this is the Deep Blue, which was developed by IBM. It defeated Garry Kasparov, the chess grandmaster, in 1996.

An AGI system is capable of performing any task which can be completed by a human being. We are yet to create an AGI model successfully.

ASI is a term that often scares people because it refers to machines superseding humans. It has not happened, but Stephen Hawking did warm about it.

Machine Learning is a subcategory of Artificial Intelligence. Arthur Samuel coined the term ‘machine learning’ in 1959. Basically, it is a field of artificial intelligence that uses statistical techniques to give computer systems the ability to “learn” from data, without being explicitly programmed. The name machine learning was coined in 1959 by Arthur Samuel.

The key idea behind ML is that machines are capable of learning and becoming smarter on their own by accessing and analyzing different types of data.

It is fast becoming the handiest type of technology of any kind of business with its quick integration. ML models can easily read huge sets of data and make predictions based on the recognition of these complex data sets and patterns. It can perform multiple activities like speech recognition, facial recognition, translation, object recognition etc.

One of the most unique features of Machine Learning is its capability to adjust and respond depending on the data which they are exposed to. This way it even eliminates the need for human intervention as long as the data keeps flowing.

Learning can be supervised, semi-supervised or unsupervised. While training an algorithm in supervised learning, a full set of labelled data has to be provided.

In unsupervised learning, a deep learning model is provided with a dataset. This dataset is without any specific instructions on what to do with it. The sample dataset is a collection of examples without any particular desired outcome or correct answer. It is the task of the neural network to automatically find structure in that data by extracting only the useful features and analyzing its structure.

Lastly, semi-supervised learning is nothing more than a training dataset with both labelled and unlabeled data. When one has to extract certain relevant features from a dataset and labelling becomes a time-taking task then this method is quite useful. It uses a bit of both for the desired outcome.