In machine learning, reducing dimensionality is a critical approach. Overfitting of the learning model may result in a large number of features available in the dataset. There are two standard dimensionality reduction techniques used by machine learning experts to evaluate the collection of essential features and decrease the dataset’s dimension. Dimensionality Reduction in Machine Learning and Statistics reduces the number of random variables under consideration by acquiring a collection of critical variables. It can be divided into feature discovery and extraction of features.

The functional implementation of these two-dimensionality reduction techniques will be discussed in this article.

PCA is a technique in unsupervised machine learning that is used to minimize dimensionality. The key idea of the vital component analysis ( PCA) is to minimize the dimensionality of a data set consisting of several variables, either firmly or lightly, associated with each other while preserving to the maximum degree the variance present in the dataset.

This is achieved by translating the variables into a new collection of variables that are a mixture of our original dataset’s variables or attributes so that maximum variance is preserved. This attribute combination is known as Principal Components ( PCs), and the Dominant Principal Component is called the component that has the most variance captured. The order of variance retention decreases as we step down in order, i.e. PC1 > PC2 > PC3 > … and so forth.

Why do we use PCA?

LDA is a technique of supervised machine learning which is used by certified machine learning experts to distinguish two classes/groups. The critical principle of linear discriminant analysis ( LDA) is to optimize the separability between the two classes to identify them in the best way we can determine. LDA is similar to PCA, which helps minimize dimensionality. Still, by constructing a new linear axis and projecting the data points on that axis, it optimizes the separability between established categories.

LDA does not function on finding the primary variable; it merely looks at what kind of point/features/subspace to distinguish the data offers further discrimination. 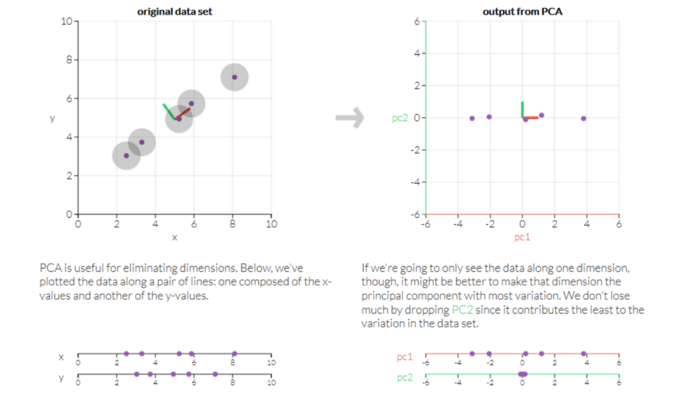 How are LDA models represented?

The depiction of the LDA is obvious. The model consists of the estimated statistical characteristics of your data for each class. In the case of multiple variables, the same properties are computed over the multivariate Gaussian. The multivariates are matrices of means and covariates. By providing the statistical properties in the LDA equation, predictions are made. From your data, the properties are estimated. Finally, to construct the LDA model, the model values are stored as a file.

Some of the practical LDA applications are described below:

When we have a linear question in hand, the PCA and LDA are implemented in dimensionality reduction, which means a linear relationship between input and output variables. But it is possible to apply the PCA and LDA together and see the difference in their outcome. While PCA and LDA work on linear issues, they do have differences. The disparity between the data groups is modeled by the LDA, while the PCA does not detect such a disparity between groups. The factor analysis in PCA constructs the combinations of features based on disparities rather than similarities in LDA. As in LDA, the discriminant analysis is different from the factor analysis conducted in PCA where eigenvalues, eigenvectors, and covariance matrices are used. There applications are vast and still being explored by machine learning experts