A Markov Chain can be defined as a stochastic model that describes the possibility of events that depends on previous events. A Markov chain gives the probability of transiting from one event to another event. The transition of the variables from one event to the other depends on a mathematical property called Markov Property. Markov property is used in all the Data science programs and its applications. This property is also used by data science beginners, in Data analytics certifications and has gained importance in all the best data science programs online and different courses offered.

To define the process mathematically, it can be expressed as follows:

The types of Markov chains are based on the state space of the system and its time index and the different types of Markov processes can be identified by the space and time which is continuous or discrete shown as below:

A discrete Markov Chain is the process that has variables in a sequence X1, X2, X3 with a Markov property in which the probability depends on the current or present state to move to the next state but not on the previous states.

It satisfies the conditional probabilities:

There are other variations in the discrete Markov chain like Time – Homogeneous chain where the probability is independent of ‘n’. There is other Markov chain with an order of ‘m’ in which the previous states influence the future states.

Markov chain has Irreducible property if it has the possibility to transit from one state to another. Let’s say a state P has accessibility to the state Q (P-> Q), then the chain has irreducible property if state originated from state Q has Non zero probability to transit to state P. This transition is called Communicating class by state P with state Q. A chain is also said to be as Irreducible if it has a single space communicating class. Suppose if it has zero probability to the transition of state P to Q, then we can say that community class is closed.

If a state P has period R if a return to state P has to occur in R multiple ways. For this state the Period is defined as: R=GCD{n>0: Pr( Xn =P | X0 = P) > 0 }. If the said condition is not satisfied, then there is no period for that state and may not reach to another state.

A Transient state P can be defined as the state where it has Non-Zero probability to never reach its own state P is called as Transience. A state can be said as Recurrent if it is not Transient failing the above-mentioned condition.

A state is defined as Ergodic if it has a Period of 1 and Recurrent in nature. If a Markov chain has more than one state if one state is non-recurrent or Not periodic then it is Non-Ergodic.

There are many applications of Markov chain which are widespread in various range of fields like Physics, Medicine, Biology, Game theory, etc. 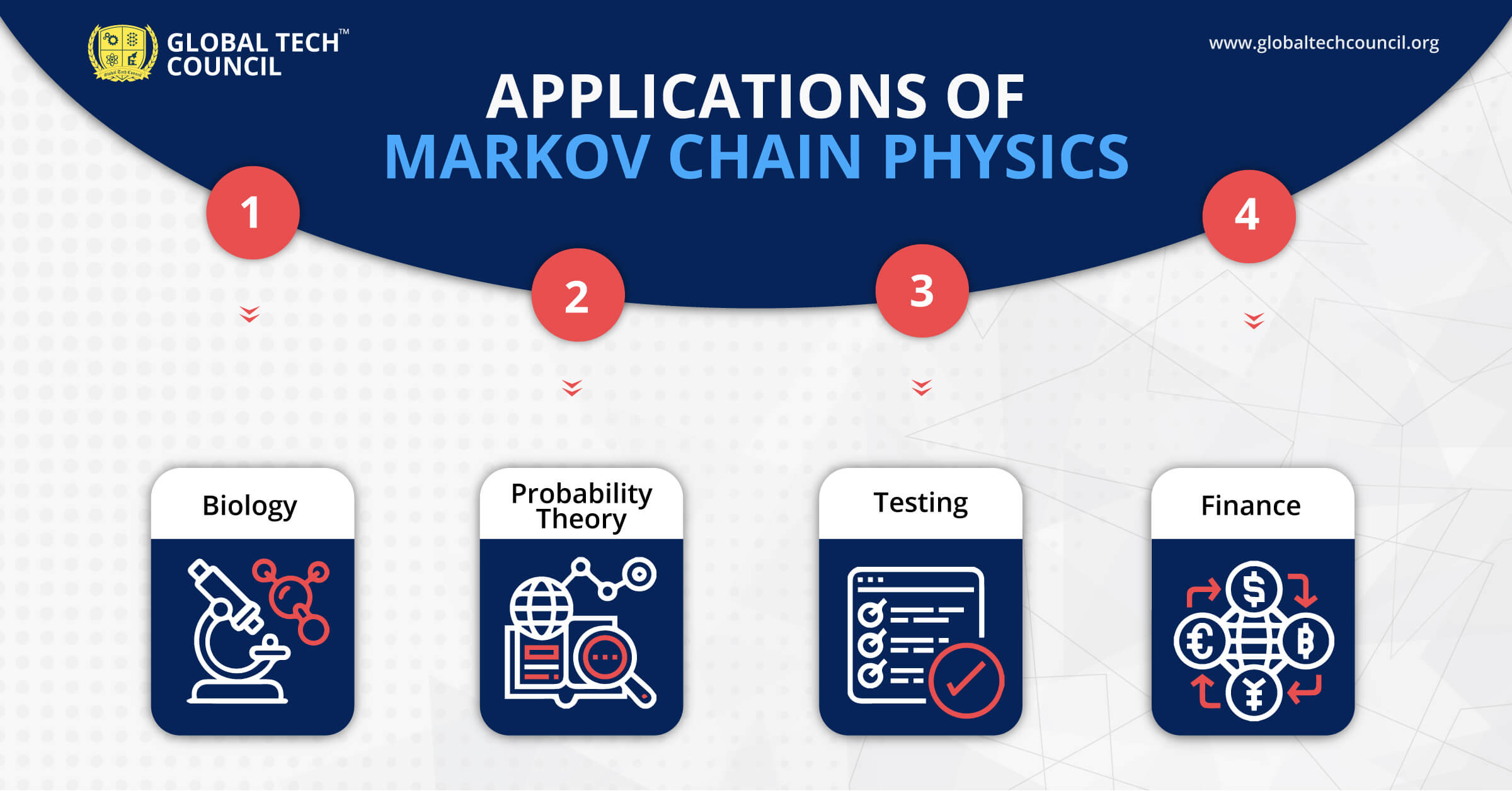 Markov chains are also used in many other areas like Games to predict the moves of the opponent, in music to produce the desired note values, in Social Sciences to figure out different studies using benchmarks or indexes.

Thus, due to Markov chains, demand has raised for the Data Science certifications, courses, and programs online and offline.