Thinking of using Python for your upcoming Artificial Intelligence (AI) project? Most AI developers across the globe have found Python to be the best language for AI, Machine Learning (ML), and Deep Learning projects. This post will tell you all about the relation between Python and AI.

AI is an integral part of our daily lives; it has become a hot topic of discussion in the IT industry. More and more companies are preparing to build products around it or integrating it into their internal processes. Thus, there is a need to simplify the development process and use a robust language for quicker delivery of solutions.

Artificial Intelligence certification courses for beginners highlight the use of Python in AI development and teach the basics of Python. While HTML and Java are still popular, python has seen a steady increase in popularity in the last few years. It is battling its way to becoming the most popular programming language.

Python is a robust high-level programming language that offers scalability and rapid development. It’s an open-source easy to learn a language, which implies that everyone can use it for free. A popular feature of Python is that the code is easier to read, making its understanding and debugging easier.

Why is AI Popular?

AI was introduced in the 1950s but has gained much popularity in the last decade because of the wide spreading of the internet. Other factors responsible for its popularity are: 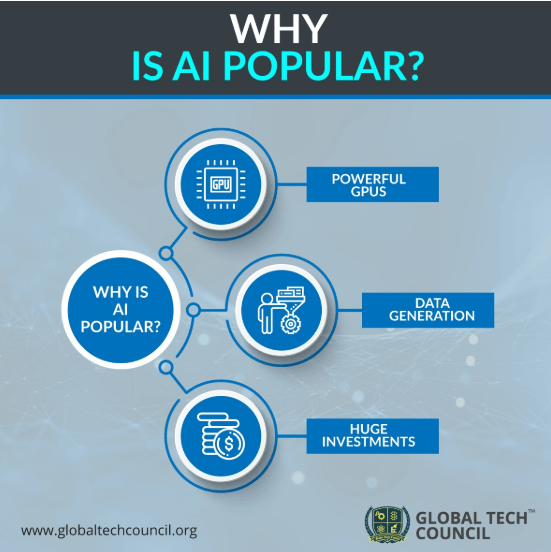 Why Use Python For AI Programming

AI developers have multiple programming languages to choose from and oftentimes it can be frustrating to find the best language that will make the development process quick and accurate. Let’s look at some of the benefits offered by Python for AI developers. 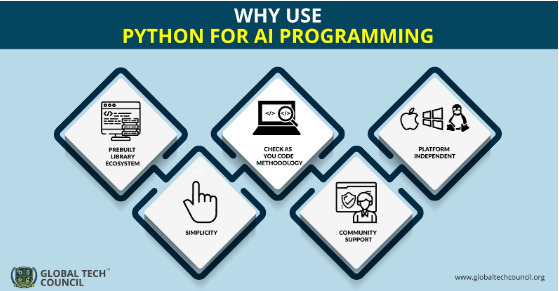 Moreover, there is no such compilation process, further reducing the development time.

AI is the future and is becoming more and more popular with each passing day. Developers need a language that complements their efforts and supports the development of AI systems and programs. Thus, the features offered by Python seem to be apt for AI developers and that’s why smart programmers choose Python as they go to language for every need.